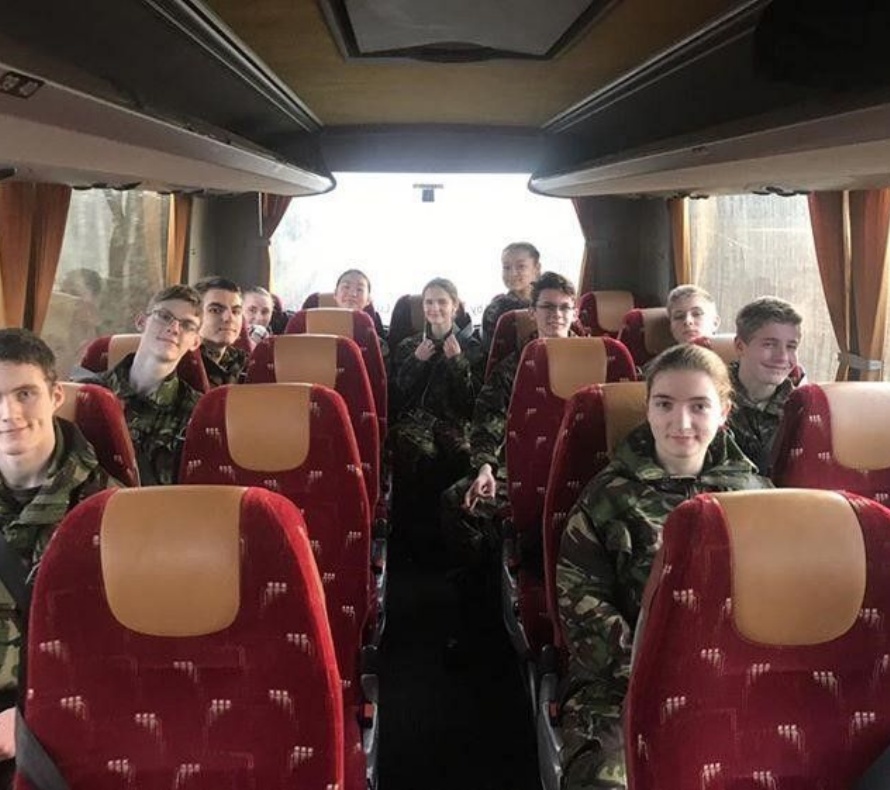 On Saturday 2nd of February, a group of twelve cadets travelled to RAF Honington for a Ground Training Competition. The coach promptly left at 7:30 and arrived at the military base at around 10:00 in order for the team to be registered.

The RAF cadets had trained very hard for months leading up to this event so there was a mixture of nerves and excitement.

The day consisted of tasks such as first aid, military knowledge, a command task, shooting and aircraft recognition.

The first event of the day, First Aid, started at 10:50. A team of four cadets were all given an individual, practical scenario to complete and then a group scenario. During the individual scenario, there was a casualty with a gunshot wound and another casualty who had a concussion. The group scenario included a casualty with burns and another casualty with amputated limbs. The four cadets had to carry out emergency first aid skills on these casualties whilst racing against time.  There was a time limit of four minutes for the individual task and eight minutes for the group task which put the cadets under pressure to work fast and effectively. Additionally, the SFX effects on the casualties were surprisingly realistic!

Next, there was a military knowledge quiz done individually by the cadets with questions ranging from ‘when was the CCF formed?’ to ‘what is Newton’s third law?’

Afterwards, there was a command task led by Sgt Middleton. The group were briefed on a scenario which involved assembling four equilateral triangles out of seven 3ft poles (this proved to be more difficult than expected). Although they did not get the correct answer, the teamwork and leadership skills shown were amazing as all the cadets worked together to formulate ideas.

Throughout the day there were free periods to prepare for the next events. The free time allowed all participating teams to retouch their uniform and practise their drill.

The drill sequence was extremely successful, despite marching too fast, with the Sergeant complimenting the cadets for their great foot drill. The sequence consisted of moves such as about-turn on the march, changing step on the march and static drill movements. A lot of effort was put into the cadets’ immaculate uniform including well-polished parade shoes.

For the final event at 14:10, half of the cadets did an aircraft recognition test and the other half did shooting.

The aircraft recognition team were shown fifty different aircraft with each image only to be viewed for ten seconds. It was made slightly difficult due to the time limit, different angles and close up shots of different parts such as the engine. However, the team was exceptionally strong as they scored very highly - only knocking off a few points.

The shooting team had lots of fun shooting with DCCT rifles (Dismounted Close Combat Trainer) which is basically the L85 but without bullets and computerised. This was slightly different to what the cadets had used before so it was rather exciting to try something new. The cadets performed really well, especially considering that they hadn’t shot with the DCCT before.

Overall, everyone had a truly enjoyable day at RAF Honington competing against other cadet forces. All cadets put in huge amounts of effort, sleepless nights and practice leading up to this event so their efforts should be congratulated. Well done to everyone involved in the competition.