House Teams Battle it Out in this Year's Sports Day

The four LSST house teams go head to head in an epic sporting afternoon where only one house can win. 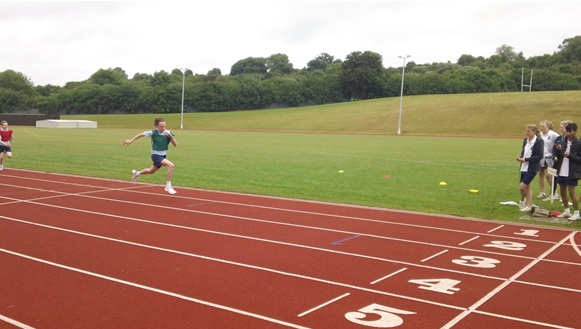 That’s right, on the twenty-eighth of June, 2013, Alexandria, Avalon, Castille and Sempringham all took to the track in a sports afternoon that was not to be forgotten. Earlier in the day, all the non-track and field events had taken place and points for the houses previously registered. Crowds of students and participants immediately began to gather, awaiting the spectacle of the event. The athletes, however, had only one thing on their minds – victory for their house team at the end of the academic year. But with all four houses boasting a strong and confident roster of promising young athletes, it was going to be near impossible to predict the outcome.

The afternoon kicked off with the intense and nerve-wracking one-hundred metre races, and with the athletes running into a headwind – it wasn’t going to be easy for any of them. Nonetheless, Avalon successfully and easily clenched the first two victories in both the female and male Year 7 one-hundred metre and Jessica Eaton annihilated the Year 8 female competition, coming a mere 0.3 seconds off the school record!

Avalon, inevitably shocked at their sudden defeat, soon realised that this sports day was not going to be as easy to win as their previous performances had left them thinking, and with Frazer Burke, won the Year 8 boys one-hundred metres with ease – Frazer also only coming 0.3 seconds away from claiming the fastest Year 8 one-hundred metres in the Academy’s history. When the young sportsman was asked for his opinion on how it felt to win, he casually replied that it felt “great.”

Castille at this point took a step forward and succeeded in winning all of the remaining one-hundred metres, from Year 9 girls to Year 12 boys. Perhaps the most astonishing and inspiring of these victories was that of the Year 10 female Amber Cannon, who achieved first place with an injured knee, which, she told us, definitely affected her performance. “My knee did affect my performance,” she assured us, “but I just kept going and I won!”

So, with the one-hundred metre races finished, it was time to move on to the relays – a track event reliant on team-work in order to be won, and the valiant Year 7s were the first to brave the full four-hundred metre team race. After Castille’s constant victories, it was a surprise to all when Sempringham claimed the first relay, soon followed by a victory from Avalon. The Year 8s took to the stage and the competition was fierce, with Avalon once again winning the boys relay and Sempringham claiming a victory from the girls. “We performed well as a team,” quoted James Sime, a victorious Year 8 boys relay race winner, “but it was me who got us back in first place.” Perhaps now would be a good time to acknowledge that there have been more modest victory quotes in days past!

And so the afternoon finished, and all the spectators made their way to the centre of the track, awaiting the long-anticipated results, and tensions rose as Alexandria were announced in fourth place with 744 points. Castille were placed third with a score of 766 points, closely beaten by Sempringham who arrived in second place with 774. And that could only mean that the deserved winners of the day were Avalon, with a total of 871 – a score well above that of Sempringham’s.

And so we can now only wait for the Sports Day of 2014 – where Castille, Alexandria or Sempringham might knock Avalon off the top spot!