The CCF march on! 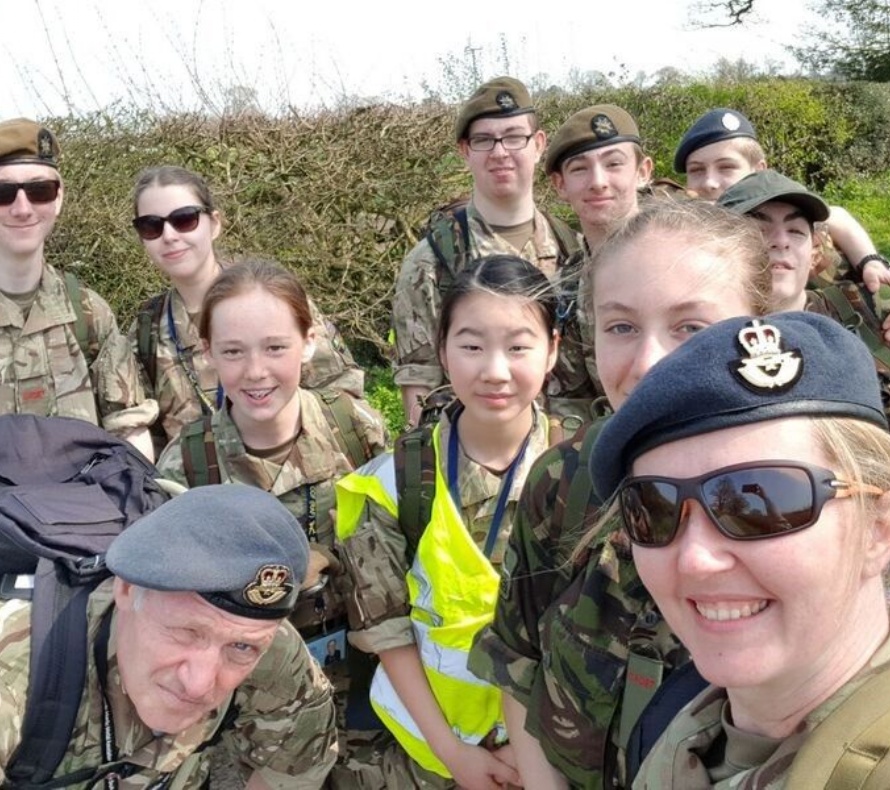 Nine cadets and two staff completed in the 37th RAF Annual 2-Day March at RAF Cosford. Over 1150 military and 130 civilian marchers took part. The Priory Academy LSST  CCF was one of 115 teams and was the only CCF team taking part.

Once the cadets had made up beds and had prepped their kit straight away so that the personal admin was done in the early part of the evening, the cadets had the rest of the evening to themselves to sort out feet taping or just general chilling out and meeting new people from air cadet units from across the UK. There were over 1150 people from across UK  and european nations' military forces taking part in 2 Day Marches, so there was plenty of chance for the cadets to talk to marchers from other countries and also chat to other cadets.

Once the briefings were finished, all the cadets could get an early night and go to bed sleeping on the floor of the gym or barrack block. Most were asleep when the lights were put out at 22:00. Time of reveille for Saturday was 05:50. Cadets were up getting dressed for the first day of marching. The team pulled on their combats and boots and headed to the mess for breakfast.

After breakfast, the team picked up their packed lunch for the day and marched back to the accommodation where they would collect their bags and head outside ready to march around to the parade square for the day's walk. With all the teams formed up and ready, the first day's march  would be started with the command from the March RSM. "By the left, quick march!"

At 07:50 the cadets were standing on the parade square ready to be set off by the March RSM. At 08:00 the RSM brought everyone up to attention and the next thing you knew it was "By the left, quick, MARCH!" and the whole detachment which comprised of 15 military and civilian teams, including girls from the Girls' Venture Corps Air Cadets, all stepped off with an eyes left and Flt Lt Summers gave a salute to a Colonel of the German Air Force who returned the salute in celebration of the 100 years of the Royal Air Force.

Towards the end of the first day and 20km later, the team marched back into RAF Cosford onto the parade square and gave an eyes left to the saluting officer.

Once we had moved off the parade square it was back to the accommodation to have a shower and freshen up after the long walk and then off to dinner at the mess at 16:30.

After food, the cadets had free time to sort out their administration for the next day and to get their feet taped.  All team members completed the first day and all would be marching the following day.

It was the same routine for the Sunday as it had been for the Saturday and we gave an eyes left to the reviewing officer on the march off, and Sunday’s 20km walk began. Overall Sunday's walk was warm although we did get a bit of rain during lunchtime.  It was important that all the team members kept drinking to keep hydrated. The team did a bit of singing, overtaking teams and ploughing on to the end of the day with a fantastic moral throughout the whole of the weekend.

By mid-afternoon the team entered Cosford, marched down the main road leading to the parade square where Air Commodore Dawn McCafferty took the salute with a final eyes left. Once finished the Air Commodore had a small medal presentation ceremony giving each team member their medals.

All cadets and staff successfully completed the RAF WARMA 2 Day Marches, albeit with some sore feet and legs but well worth the effort. The team from The Priory Academy LSST CCF were a credit to the Academy. Well done to them all.