CCF Cadets at the Cenotaph 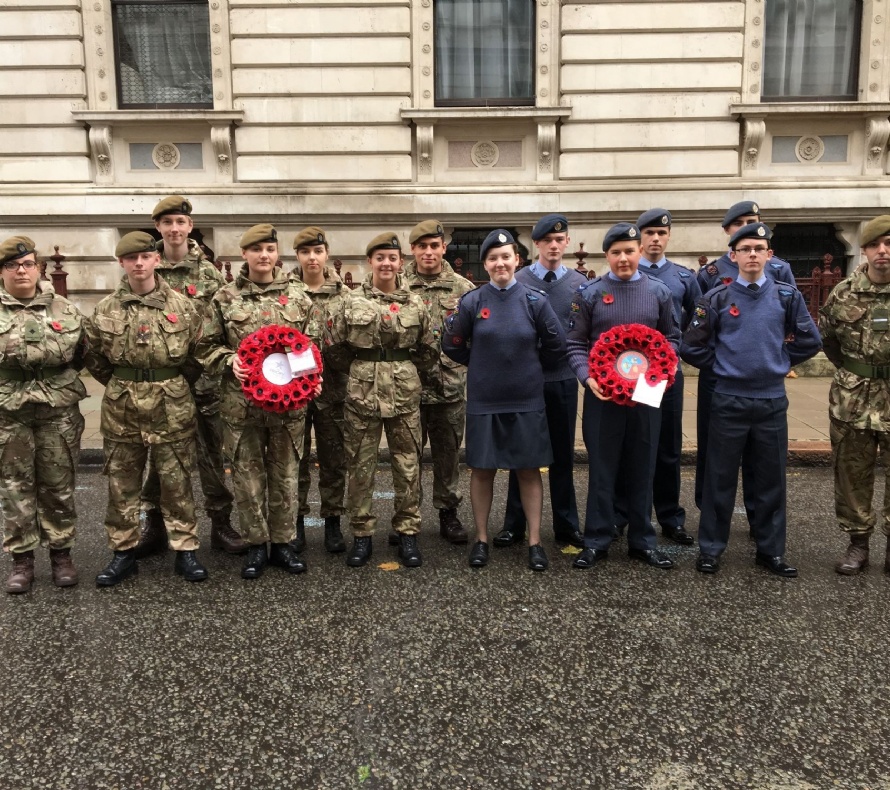 On Saturday 11th November twelve cadets from The Priory Federation CCF took part in the Western Front Association’s Act of Remembrance at the Cenotaph in London. This is an annual event that takes place on Armistice day at the London Cenotaph to remember those who gave their lives in the World Wars.

The day started at 05:50 when the cadets arrived at the Academy ready to begin the journey down to London. After a very sleepy two and a quarter hour bus journey we arrived at South Mimms Service Station, where everyone had to change into their best uniform in just fifteen minutes before a last hour's drive into central London.

At about 10:00, after a security check, we arrived at King Charles Street, which is adjacent to the Cenotaph. Here we spent the next fifty minutes practising the drill and wreath laying with the rest of the cadets who were attending. We were also told at this point that there were TV cameras and the ceremony was going to be on live TV!

At 10:55 The Priory Federation of Academies CCF Cadets marched to the Cenotaph, leading the whole detachment of cadets, following the Band of the Pipes and Drums from the London Scottish Regiment and VIPs from around the world. Just before 11.00 we had reached the Cenotaph, ready for the ceremony to begin.

At exactly 11 o’clock as Big Ben chimed, the ‘Last Post’ began, played by a member of the Coldstream Guards. This was followed by a minutes silence and ‘Reveille’. The Ceremony lasted about thirty minutes, during which time wreathes were laid by the VIPs, school children and five selected cadets, two from the Priory Academy LSST, Cpl Nikodem Czarlinski and SSgt Fiona Lawson. After prayers and readings, the ceremony ended with the bugler playing ‘Sunset’. The Priory Federation of Academies cadets then lead all the cadets, marching back to King Charles Street. Here we were able to reflect on the successful ceremony and all the cadets involved were congratulated by the parade marshal and also an Air Vice Marshal.

We then started our long journey back home. However, this was improved as we went for lunch in outer London at a Harvester, before continuing back to Lincoln. The cadets arrived back at school at 17:30 after a long and extremely memorable day. Everyone was quick to meet parents and go home.

A heartfelt thank you must also go to all the staff involved without whom, the cadets would not have been able to attend such an important event.