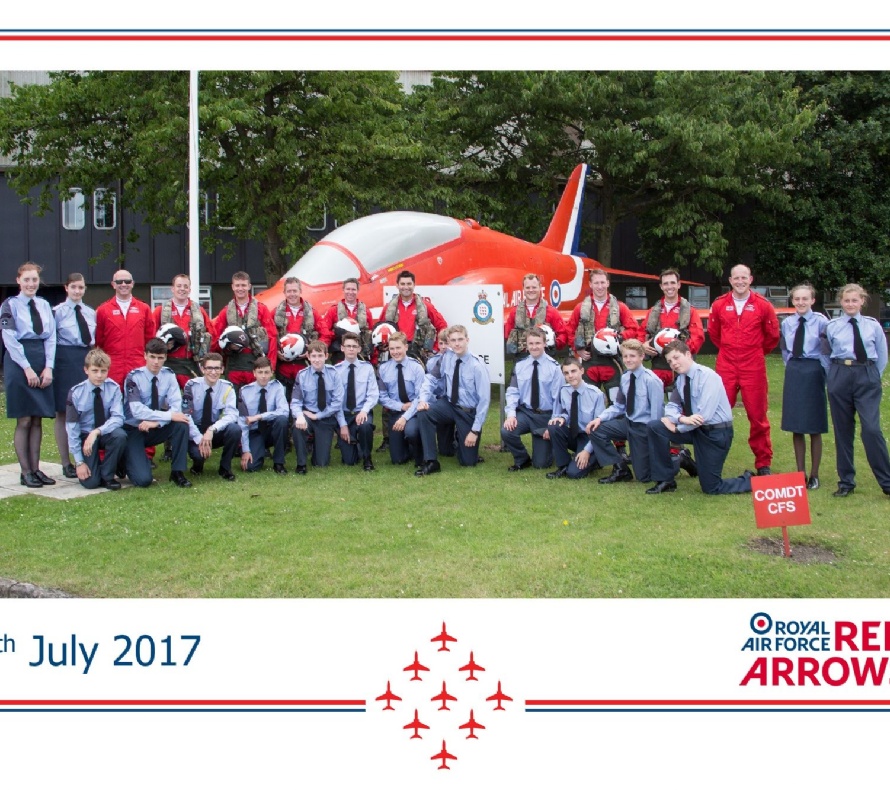 On Sunday 2nd July the RAF section cadets headed to where the Royal Airforce Aerobatic Team (Red Arrows) is stationed in the UK at RAF Scampton for their summer camp. The Royal Airforce Aerobatic Team is a very important side to the RAF, as their job is to display the best pilots that the RAF has to the rest of the world. This includes the 4,700 displays that the Red Arrows have performed worldwide.

The camp began on Sunday. We travelled down to RAF Scampton in the afternoon, and thankfully the journey was short since the summer camp was based in Lincolnshire this year. When we arrived we had rooms allocated and unpacked our bags. We all had to have tidy rooms with correctly folded uniform, mainly to make life easier on camp. After unpacking we went to dine in the Junior Ranks Mess and practised drill to ensure all cadets were on the same level and in time with each other. Then we prepared uniform for the remainder of the evening for the following day.

On Monday we visited the Air Traffic Control Tower (ATC) and the Fire and Rescue Service based at Scampton. There we could interact with the personnel in order to gain an understanding of what the daily jobs included. The men working at the ATC have a very strenuous task since they have to ensure no planes crash into each other and update the pilots on the weather if it’s changing dramatically or whether the air speed and direction are correct to enable a safe landing. Also the exams for this profession have one of the lowest pass rates from all the courses that the RAF provides. Subsequently we then were shown by the Fire and Rescue Service the many tools and how to use them to get people out of a car accident. These devices turned out to be heavier than I expected so there is no surprise why the F&R Service spend so much time in the gym.

Later we travelled to Newark Air Museum, holding a variety of aircraft, ranging from the Avro Vulcan B.2 to Westland Wessex HC.2. There the cadets were able to extend their military knowledge concerning the different type of planes. This helped the cadets improve their ability in differentiating between planes by looking out for their key characteristics. We spent the rest of day swimming at RAF Cranwell which included trying to pick up a black brick from the bottom of the diving end of the pool. This certainly came across as a severe challenge to most of the people who tried.

Tuesday 4th July was a particularly relaxed day. The morning consisted of some cadets including myself going gliding at RAF Syerston and others doing leadership tasks so that not only the cadets enhance their leadership skills but most importantly their team working skills. The gliding included a winch launch. This is the unpowered aircrafts known as gliders being pulled in by a cable usually from 1,000 to 2,500 metres long. This gives a rapid increase in acceleration and an adrenaline rush as you are being pulled by a high-tensile steel cable into the sky at a steep angle. The day finished with all cadets coming back together and going back to RAF Cranwell for high ropes. There we faced many mental obstacles like jumping from a platform placed 11m above ground, but gratefully all took that leap of faith and came back to the ground in one piece.

Wednesday was RAF Waddington Day. We were lucky enough to tour the Boeing E-3 Sentry and the flight simulator designed for the aircrew for that plane. This was very interesting to see how complicated the task of being one of the aircrew on the plane was, because there was a significant number of buttons each doing a separate role to intercept and analyse radio signals picked up from the radar attached to the top of the plane. We also visited the RAF Waddington Heritage Centre and received talks from the 54(R) Sqn about their role as part of the ISTAR organisation.

On Thursday the cadets who hadn’t been gliding went gliding and others went flying. This meant that most of the cadets managed to get the Blue Gliding Wings which is the start of the progressive system to go and fly solo in a glider. In the evening we went back to where we were staying in the barrack blocks in RAF Scampton to go to another heritage centre filled with rich and varied history, with the main squadron there being the 617 also known as the Dambusters.

Friday was our last day of camp. It began with a drill competition that all cadets were practising for all week, with each flight IC commanding drill in front of the SWO but before that the SWO marked everyone’s uniform out of 10 with each small mistake in the uniform lowering the score dramatically. With A Flight winning the competition we had the pleasure to see the Red Arrows practise their display choreographed by Red 1 -Sqn Ldr David Montenegro. After that we took a camp photo with the whole team and went flying once again. The day ended with awards being handed out as well as comical ‘paper plate’ awards given out as well, including the award for best male cadet gained by Cdt Butt and female cadet by Ridgeway-Adams.

On Saturday, we packed up and loaded out kit onto the buses but we couldn’t leave until we prepared our rooms to the condition that we found them in.

Overall, everyone enjoyed the camp, and many, including myself, cannot wait for next year's camp.