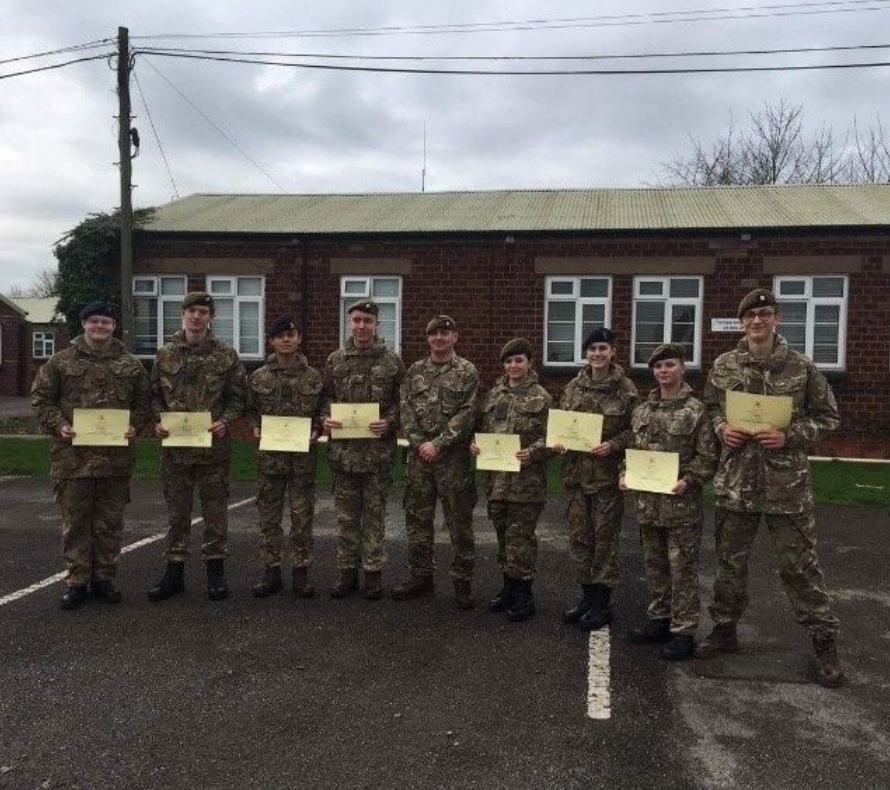 Last module the CCF sent three individuals to undertake the Senior Cadet Instructors Course (SCIC) at Beckingham Training Camp. The course ran twice over a two week period. One was held from the 3rd of February to the 10th of February, whilst the second ran from the 10th to the 17th of the same month. SCIC is a course available to Cadet Non Commissioned Officers (NCOs) who are completing their senior syllabus. It builds on the skills that they learn from the Method of Instruction course and qualifies them to instruct cadets. This year Sgt Alex Day, Sgt Joanne Clark, and Cpl Charles Dean went on the course, all of whom passed.

Sgt Day describes his experience below.

“On arrival, I was sent to the Cinema to register. This is where I made my payments and received my name tag, billet number, and was assigned to a section (a team of 8 people). I went to my billet (accommodation) and met with the people I was sharing it with. At 2050 hrs, we reported back to the Cinema to receive a brief welcome and introduction to the Course by Captain Wright, the officer in charge of the course."

In the morning, we had a billet inspection at 0645 hrs before heading off to breakfast at 0700 hrs. Each section had been allocated a room where they would both be taught and instruct for the week. We went straight into the course by being told about our first teaching lesson. Due to small error, I was given Rifle Drill: Shoulder to Slope Arms. It didn’t go to well as I was unfamiliar with Rifle Drill and my Section Commander, Sgt Witcomb, thought I was ACF, hence the lesson I was given. Fortunately, I was able to re-take my lesson after lunch when everyone else had done their own lessons and I passed. We were then given our lessons for the next day, mine being Skill at Arms: Weapon introduction, Parts overview, and Normal Safety Precautions. This I was comfortable with and we had the rest of the evening to plan our lessons.

On the following day we taught our lessons,which I passed first time. We then had a “Pocket Lesson”, a lesson designed to make us plan our lesson with limited time- in this case 45 minutes to plan a First Aid lesson. We were to teach it in groups, where mine had to teach Open Fractures. After that, we were given our lessons for the next day, mine being Map and Compass: Route Cards. We then spent the rest of the evening preparing for this.

The next day, we all taught the lessons we had been allocated and following this we had another pocket lesson, this time being Military Knowledge. In the afternoon, we got our lessons for the Wednesday, so we went to the armory to receive our rifles, with webbing (a load carrying system, it allows you to carry essential pieces of kit closely to you), water and lesson materials, and headed off to our training area.

The lesson I was given was Field Craft: Section Attacks. I went to the area where it would be taught. I spent a lot of time looking at the area I was going to teach it in so I could best plan how I would carry the lesson out. Following this we returned to camp and had time to plan the rest of the lesson.

On the Tuesday, we set off back to the training area  and with Sgt Witcomb we practised patrolling and reaction to effective fire. Following on from that, we went to our lesson area so that we could set up our lessons, to see whether they would work or not, ready for arrival the next day. We headed back in the evening, and again, spent the rest of it planning the lesson.

In the morning, everything was prompt so that everyone could get their lessons prepared. We went around the training site, taking part in each of our sections' lessons, and before going to the next activity, which for me was patrolling, we would break off to our area to set up, ready for when my section finished patrolling. In my lesson I got to act as the enemy in a defensive position using blank ammunition. Once all lessons were taught we all headed back to our administration area where we would be sleeping that night.

In the admin area I was told that I would be Section Commander of a Reece Patrol (a patrol with the aim of gathering intelligence), which would be happening that night. At 1400 hrs I reported to the briefing room with the other Section Commanders, and was given my brief, including the area password, my section’s objective, rules of engagement and required action if we were spotted. Section 2’s objective was to move to and observe a presumed enemy defensive position. After the brief, my second in command and I were given a night vision sight, which I fitted to my rifle.

At 1815 hrs, we set off for our patrol, where it was almost pitch black, and raining heavily. On patrol, we used personal role radios (PRRs) to communicate between us as well as hand signals. If a car was spotted headed in our direction, I would say, “White Light. White Light,” and we would all stop moving and get down on the ground. We proceeded through and along woodland, coming across obstacles such as roads, fences and bridges. Once at the Forward Rendezvous Point (FRV), I ordered Delta Fire Team (half of my section) to cover the direction we came from, and Charlie (the other half) to cover myself and the point man (rifleman in front of section commander), while we crossed an open field to observe the enemy. We crawled on our fronts across the field to a covered position. As I was the one with the night vision, I observed the enemy and had my point man write down what I was seeing. On a few occasions, the enemy would scan the area with a spot light, where we would have to get our heads down into the ground to avoid being spotted. After I was happy with what we got, the two of us headed back to the FRV. However I wasn’t going to leave yet, so I ordered Delta to move along the hedge line to another position, which was perpendicular to the one I was previously in, to see if there was anything I couldn’t see from my position. I ordered them back, and we made a return patrol back to the administration site at 2045 hrs. Our mission was successful, and our information was passed on to the higher personnel so that they could plan for the next day. That night, we were on shifts for sentry duty (guarding the administration site whilst others slept).

In the morning at 0530 hrs, we woke up ready to pack everything away and receive a brief for the next plan of action. I was relieved as Section Commander so another could have the role. We were told that we would conduct a Section attack on the position which we had observed the previous night. I was part of Charlie Fire Team, who would be responsible for assaulting the position, while Delta gave covering fire from the position which I had previously used to observe the enemy.

Once ready we patrolled using the same route as the Reece Patrol to the defensive position. Delta began by shooting the enemy, so that we as Charlie could move up. We used a smoke grenade, which fortunately with the wind, spread across the entire tree line, was covering us as we moved up. We jumped over the walls of the defensive position, and assaulted to area, shooting at any enemy who were seen. We were successful in taking the position, so Charlie moved out the area, and formed “All Round Defense” for a regroup. Once Delta arrived, we checked ammunition and casualties before we moved back to the Admin Site.

When we got back, we waited for the other Sections to return, and then loaded our bergens (rucksacks) onto a van and we drove back to the camp. All the billets began packing away, ready to leave the next day. In the early evening, we all practised our closing parade which would be done before we left.

In the morning, we had breakfast and proceeded to the parade ground, where we all received our certificates from Captain Wright, after which we went to collect our belongings and leave.

Overall, I loved the experience that SCIC gave me. The facilities were great, including the food and showers (a few unreliable heaters though), and the people there were pleasant, enough that if we had any problems, they were willing to help. After every lesson, Sgt Witcomb gave very constructive feedback and asked for our own thoughts on how it went, before moving on to the next person’s lesson. I definitely gained more confidence on the course, and now know the proper ways of planning a lesson.”