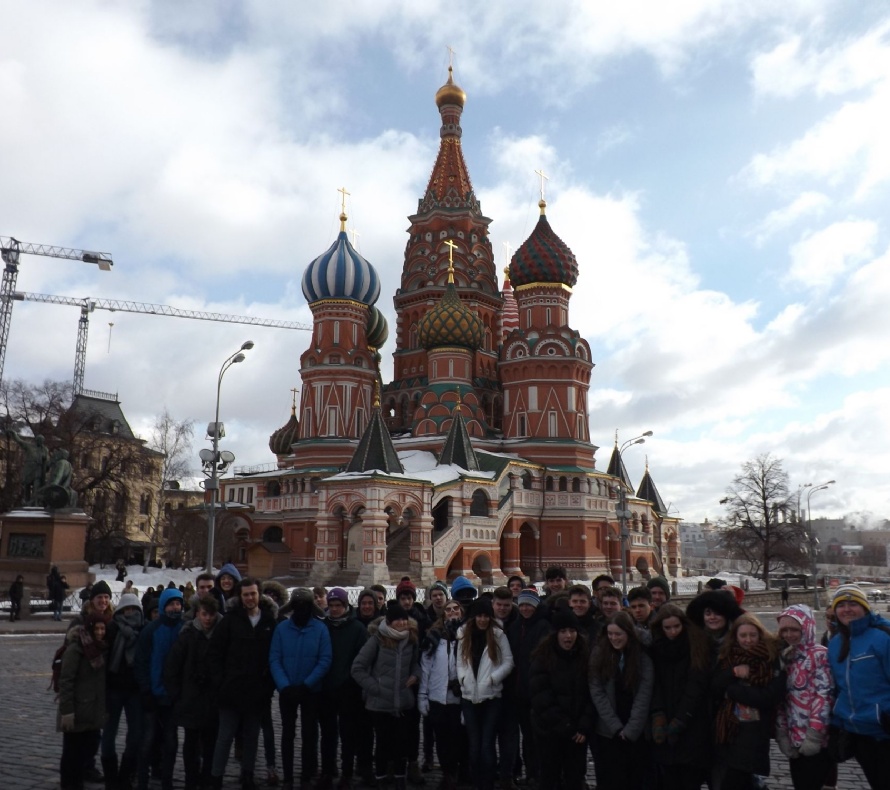 When it comes to history, Russia is as made by its past as it is scarred. Just the 20th century saw the very makeup of the vast nation drastically altered, dissected and mercilessly worked by a great number of ruthless regimes. Therefore, a visit to Russia’s two greatest cities, in which half of the Y13 course took place, proved the perfect marriage.

Four members of staff and 40 students took on the six-day trip and began their journey by arriving in one of Moscow’s five airports. The coach journey from the terminal alone proved ample indication of the sprawling nature of Russia’s capital – a melting pot of over 13 million people. The Cosmos Hotel proved the accommodation of choice and ranks as the country’s second and the world’s 68th largest hotel.

The students took the short excursion to Red Square – arguably Russia’s most iconic site – and the unique opportunity to visit Lenin’s mausoleum. To be so close to the resting sites of both Lenin and Stalin proved an uncannily intimate experience. For all the power and reputation of the former, his stature of 5’ 4” was vastly apparent. Camera rolls were suitably filled, too, with the magical winter scenery and the technicolour turrets of St. Basil’s Cathedral on display.

The afternoon saw a trip to the stunningly decorated Christ the Saviour Cathedral and its panoramic views as well as the Luzhniki Stadium – a site of bad memories for any Chelsea supporter. The day was capped off by a trip to the Moscow Metro, however. With chandeliers, stained glass windows and mosaics in abundance, it proved an emphatic display of magnificence. Arnos Grove and Dollis Hill can but dream of such architecture.

A second day in Moscow proved the perfect opportunity to visit the Kremlin. The stomping ground of Vladimir Putin proved nothing short of a treasure trove for the curious with the world’s largest cannon and bell as well as the Dormition Cathedral taking up residence. Yuri Gagarin’s presence in the fortress was reduced to that of a tree, though.

The Museum of Contemporary History was also on the agenda and proved brilliant in its exploration of the revolutions as well as their permutations. It was incredibly interesting to garner a Russian perspective on the events and regimes also. After all, the views harboured of the seemingly ruthless Stalin and philanthropic Gorbachev would stand queer, although admittedly intriguing, on western shores.

After a further photography spree in Putin’s back-yard, the final moments in Moscow could be digested over a game of ten pin bowling. Then came the overnight journey to Saint Petersburg on a train which won’t be winning awards for roominess. No cats were swung. Nevertheless, it accommodated the perfect chance to traverse Russia on land and through the arterial railways for which it claims fame.

First impressions of Russia’s second city were overwhelmingly positive and the early start did nothing to dampen the majesty. Saint Petersburg was littered with incredible architecture and intoxicated with an unerring sense of grandeur and magnificence. This was no more exemplified than by the city’s cathedral with which only London and the Vatican’s efforts can rival for size.

The morning was spent taking in a great number of sights with the Church of the Saviour on Spilled Blood proving something of a highlight. A tribute to Tsar Alexander II, the church is nothing short of a masterpiece and a beauty spot on an already impressive city. The condition of the Moyka River was a stunning remainder of Russia’s winter. A thick crust of ice showed Mother Nature was firmly in control, but for the brave residents treating it as a treacherous terrace.

Having grasped the opportunity to sample such Russian favourites as beef stroganoff, Kartoshka and Borsch at lunch, students travelled to the Peter and Paul Fortress. There was the chance to see the tombs of every Russian Tsar, including that of Nicholas II, and the prison that kept Fyodor Dostoyevsky and Leon Trotsky behind bars.

Friday saw a trip to the Winter Palace and the museum that clothes its ornate rooms – the Hermitage. In having more paintings than any other museum of its kind, it displayed the works of artistic icons such as Titian, Rembrandt and two of the ten Da Vinci originals that were ever completed. One of the thousands of rooms also proved the sight of Bolshevik ascension just less than 100 years ago. It was yet another opportunity to walk in the footsteps of those that face lifted Russia amid the melodic chaos of 1917.

This was hammered home upon the excursion to the Museum of Russian Political History. Both Lenin’s desk and the balcony from which he made his July Days speech were exhibited and in admirably unaltered condition. With no other than Sputnik itself dangling from the ceiling too, it was nothing short of a successful and informative visit.

Souvenir hunting and a fantastically located memorial to the Siege of Leningrad earmarked the final day and a fitting goodbye to the inaugural running of the trip. It proved an opportunity to which few school trips can rival both in its scope, ambition and close relationship to the course from which it is born. Placed in two unique and beautiful cities with amazing staff and students, it must be seen as a great success.

For all the tyranny of the Tsars and the blood-letting of Stalin, Russia knows how to do its architecture, history and, apparently, how to install a metal detector.