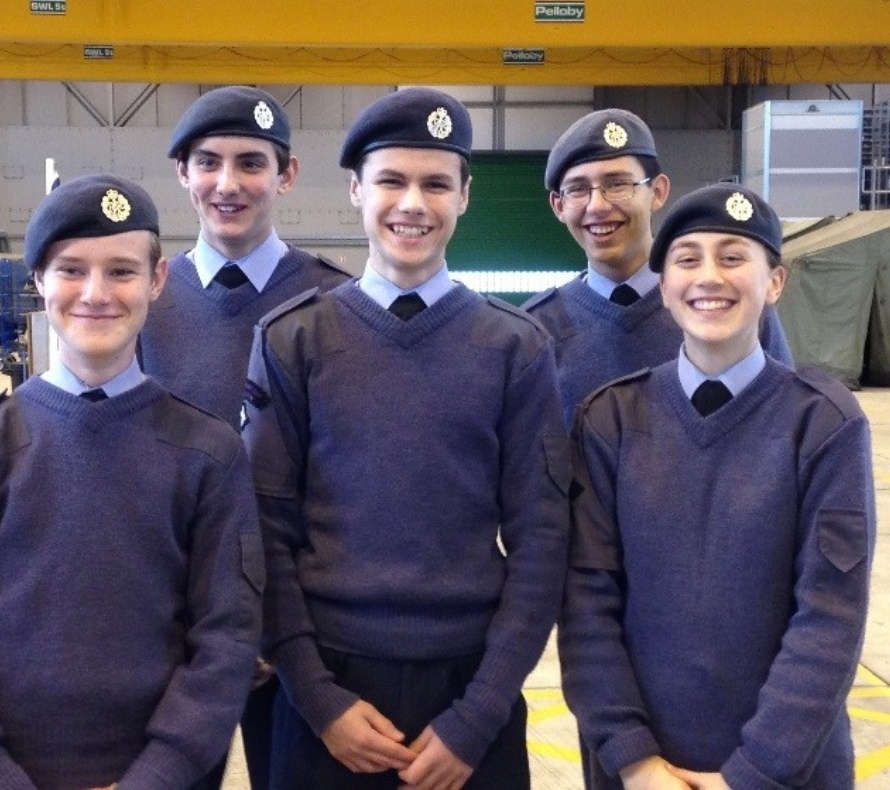 In February half term five Year 10 RAF Cadets began their journey towards becoming leaders in the CCF when attending a week long leadership course at RAF Wittering.

On the Monday, we arrived at RAF Wittering at 1700. After a brief period of bag moving and transferral, we finally got to our accommodation which was a barracks block. We unpacked and sorted all of our kit out that we would need over the coming week. Our first meal upon arrival was a simple packed lunch as we had arrived too late to go to the Junior Ranks Mess. After eating, we began our lessons. The first talk we had was outlining the week and how it was going to run. After that was a lesson on basic uniform, giving us the standards that we had to set to the cadets beneath us. Afterwards, we headed back towards the barrack blocks for a bit of kit preparation and sleep.

On Tuesday, we got up at 0600 to begin the next day. We got showered and prepared for the day and shortly headed off to the junior ranks mess for our breakfast. The food was good and tasted nice. We began the day with some basic drill and marching practise. It was again to set our standards and also to prepare for the passing out parade we had on Sunday. Following this was the beginning of our day’s lessons. These were on a variety of topics including public speaking, giving a brief on a situation and things like that. In the midst of this was lunch which was also at the junior ranks mess. After the lessons finished, we had a lot of free time to a variety of things. Kit preparation was a major part of this was there was lots we had to do but there were also many games played and trips out to the spar. Lights out was at 2245.

On Wednesday, we got up again at 0600 and prepared for the coming day. The day started with breakfast in the junior ranks mess and we returned for a uniform inspection. Our uniform was closely scrutinised with ever little detail being judged. After this, we went down to the education centre to begin the day’s activities. Each individual flight of people split apart under a flight commander. During this, we completed some small command tasks (leadership exercises) to judge our abilities and progression, putting into practise what we had been taught in the past two days. Everyone came together and discussed to strong and weak points of how we acted as leaders in these small tasks. These tasks could be as simple as building a tower that could sustain a marble as high as possible. Then, after having lunch, we had lessons on our roles as JNCOs and what we had to do outside of leadership tasks. We also gave small two minute presentations about ourselves to gauge our public speaking abilities and whether we had progressed or not. Following this was dinner at the junior ranks mess. More drill followed this and then the day’s events were mostly over, apart from the free time which we had, for kit prep and speaking presentations.

The second half of the week was full of activities which included the command tasks that everyone took part and even became the leader of the flight. A command task is a group problem solving exercise and its aim is to develop or assess teamwork, leadership, communication and problem solving skills. We did this in the woods in our greens applying our knowledge that we learnt in the first half of the week. We also presented our five minute speeches on a topic that we were given before the course and had to prepare the presentation before hand and work on it on the course. In addition we took part in the low light exercise, which was to find an injured pilot with the grid references of his position placed in two different boxes in the woods. Finally at the end of the week we took part in the passing out parade showing that we all passed the course and the hard work we put into the drill practice that we had throughout the week.

During the week, we all learnt how to manage situations under pressure and perform tasks with varying limitations. As a whole, we developed leadership qualities and briefing situations using SMEAC and PICSIE. We began to understand our personal limits and how to effectively work as a team to overcome the difficulties that may have occurred due to our personal weaknesses.

Every aspect of the week I found enjoyable. One part in particular really stood out for me and many of the other cadets who were asked was the command tasks. These were enjoyable because they gave us a chance to reflect on our new skills that we had learnt over the level 1 part of the course. It also allowed each individual to develop as a leader and gel with the other members of their flight. Another particularly memorable aspect of the week was the Night Exercise when the 4 flights combined into 2 flights and we all worked together to (attempt to) solve a cryptic exercise. This taught us the importance of team work and how the absence of it affects every member of the team. The only aspect of the week which was not as enjoyable was the theory lessons, however, these were essential to make the command tasks possible. Also, they were very eye opening and it is safe to say that all the cadets benefited from the theory. Overall, the course was very enjoyable and worthwhile and I feel it has contributed to my development as a leader and I would highly recommend it to any cadets that are thinking about going.

Personally, I found that the best part of the week was the command tasks. This is because they were an active way to test out newly developed skills in the field, doing tasks like setting up minefields and building tents blindfolded. However, the night exercise was also enjoyable, with us being sent to recover the downed pilot after setting up the camp, with us immersing ourselves in the scenario by crawling around beyond the right of the enemy.

The week has been really rewarding for us all and we all hope to continue our leadership skills within the CCF to become effective leaders for the future.