Making robots rise to the challenge!

Year 13 Young Engineering team took a robot they have been building to a competition in Coventry where it performed tasks against opposing robots and the clock. 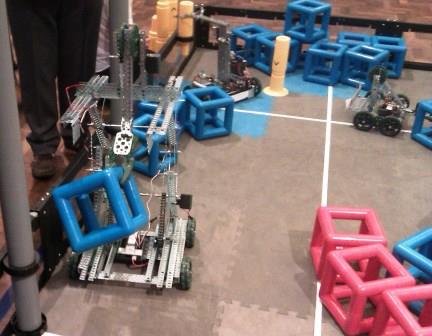 Year 13 Young Engineering team took a robot they have been building to a competition in Coventry organised by Vex Robotics and Northrop Grumman Ltd. The challenge is called Vex Skyrise and the robot has to perform tasks, such as tower building, against opposing robots and the clock.  It was our first time in this sort of competition so today was very much a fact finding mission.

After arriving at a snowy Coventry, we quickly realised that the competition was going to be very difficult, some other schools at the event included Bourne Grammar School, Barnes Wallis Academy, King Henry VIII School Coventry and Caistor Yarborough Academy .  The team made some last minute changes to the robot and managed some practice before the important initial eight match qualification event that would determine the seeds for the main event. After losing the first two matches we were in last place and it really looked desperate. However with just 18 minutes before our next match the team made a major change to one of the mechanisms that we hoped would improve things.  We managed to win our next three matches and got up to 3rd place, however we got very unlucky in the draw for opponents and ended up just missing out on being seeded.

Undeterred by our misfortune we seemed to get better in the main event, with Lucas Engelbert controlling the robot brilliantly, winning game after game against strong opponents and after a 2:1 victory in a very tense  semi-final we made it to the final against a far better robot with a very experienced team.  We were very pleased with second place. The winners were King Henry VIII School. Their brilliantly engineered robot was outstanding on the day.

We hope to return next year, and go one better.  The photograph is our robot carrying a blue cube in free practice, with two other robots in the background.