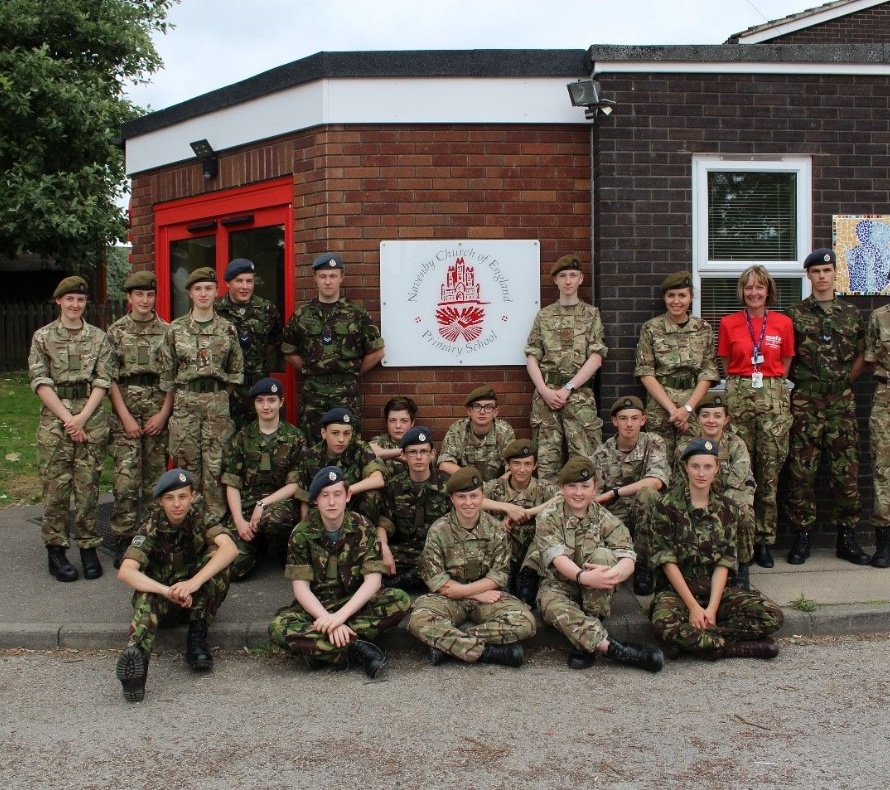 On Friday 23rd June a group of cadets went to Navenby Primary School in order to learn leadership and teamwork by teaching a group of children a variety of military activities such as drill, aircraft and much more.

Another activity in which the children participated was drill and military ranks. At the beginning of the lesson they were taught about the different Non-Commissioned Officer ranks, ranging from Cadet to Cadet Warrant Officer. After that they learnt some basic drill techniques such as marching, turning on the spot, saluting and standing at attention. After this they had a small drill competition as well as the Year 2s providing a show of what they had learnt to Sqn Ldr Thompson

In mixed activities, the children learnt teamwork through a series of fun team-based games using a large parachute. To begin the lesson the children sat under the parachute to have a talk about what the plan for the lesson was before playing some games such as ‘Shark attack’, ‘Cat and Mouse’ along with some other fun activities the teachers could get involved in.

In camping and navigation, the children were taught how to set up the tents that both the CCF use on navigation exercises and the tent that those who do DofE use when they go on their expeditions. Once they had been taught they assembled the tent, with the help of some cadets, before taking it down.

When the children did aircraft, they learnt how aircraft stay off the ground and used this knowledge to create their own aircraft models (paper planes). In fitness they did a variety of exercises such as ball bounces; running races; press ups; sit ups; planks and more. They did this as fitness tests are a compulsory thing in the armed forces so they got a taster on what a fitness test would be like in the armed forces

In this exercise, the children were given a series of equipment and were tasked with building a rocket. This promoted both teamwork and leadership as everyone had to work together to complete this and for that to work well they’d need a team leader. After this they had to run back and forth from one place to another to try and duplicate a structure with their pieces.

Finally, the children learnt teamwork through a series of team-building based activities. The first activity is called the ‘Elephant race’. In this ‘race’ one person would run to a point and back then reach between their legs and hold the hand of the person behind them to run to the point until the whole team made it there and back. After that the team had to get in a circle and sit down on each other’s knees without falling over. The final activity was where the children made a circle by holding hands with one set of arms in a hula-hoop which had to travel all the way around the circle.

Overall it was lots of fun for both the cadets and the children and everyone learnt something from that experience.