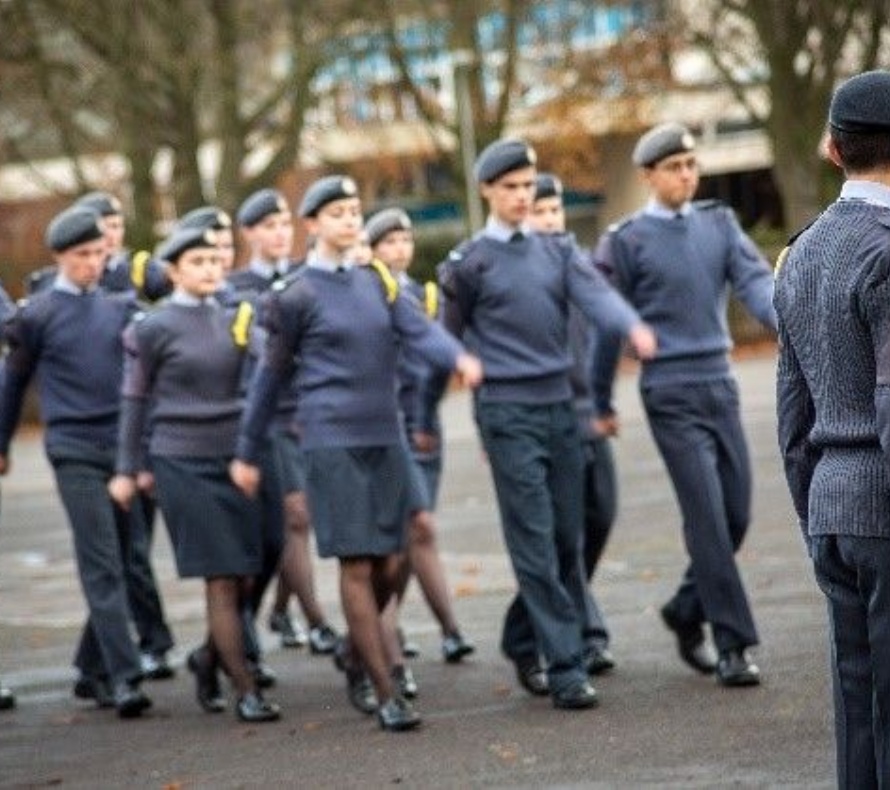 On the 27th of November, thirteen cadets from the RAF section of the Priory CCF took part in the Air Squadron Training Trophy at RAF Cranwell. Sections from around the eastern area had to compete in six different disciplines to get into the national finals. However before we obtained a place we had to do a military knowledge test and score within the top 16 of 33 schools. This involved mainly questions about principles of flight, navigation, aircraft and the history of the RAF.

Leading up to the event, the members of the drill team met up several times throughout the academy week, to practise their routine and get it as good as it could be. Also, members of the DCCT team had to pass a weapon handling test to ensure that they were fit to shoot and knew all the correct drills.

When we got to RAF Cranwell, the fitness team had to immediately get changed into their training kit to take part in the 1.1 mile run around a track with other schools. The Priory members did very well in their heat achieving 4th, 5th, 6th and 7th places.

Later, a team of four cadets tackled aircraft recognition. The test itself involved being shown a photo of an aircraft and then having to choose between 8 different options of what it could be. The options varied from the name of the plane, perhaps typhoon, tornado and so forth, to the type of plane maybe fighter, recon, training.  In our team, two cadets got an individual score higher than 50% and one even achieved a score higher than 70%.

Then, the first aid team was challenged in their event. Their task was to successfully and safely help to preserve life of the casualties involved in a given situation. This turned out to be a drunk female and a bleeding male. They used skills that they had learnt; to assess the situation and use their training to treat the casualties for the injuries they had. The team then split up to perform CPR, treat the bleed and calm the casualty down. The team did extremely well, narrowly missing out on 3rd place by one point.

The next event was slightly different, as this required a formal inspection of our Wedgewood uniform and the performance of a drill routine. Our uniform inspection went without a hitch, and only minor mistakes were made during the sequence. Special congratulations should be given to the drill squad, as the examiner said it was one of the most flawless sequences that he had seen from our Academy.

Immediately after this was the command task. This involved the leader of the activity being given a brief and trying to get his group to finish the scenario. In this case the team had to get a box filled with unstable explosives through a “swamp” using flotation devices. The group performed well together, just narrowly missing out on finishing the task due to the pressure of time.

Lastly, four of the cadets were tasked with shooting the DCCT. This uses lasers which are detected by a computer. The team did quite well given the lack of practice they had had beforehand.

Overall, the Priory cadet force came 7th out of the 33 schools in the area. A special well done for the members of the team; Sgt Bethany Dyer, Cpls Jacob Taylor, Abbey Alderman and Katy Cannings, LCpls Stephen Anderson, Connor Danes, Abi Emery, Niko Czarlinski and Alan Middleton and finally Cadets Joe Chetwynd, Kate Atkin and Ben Griffiths. A special thanks is extended to FS Callum Frances, who was an exemplary team leader and the staff who took the time to train and take us (2Lt Mullins, Fg Off Summers, Sqn Ldr Thompson and Civilian instructor Mr Atkinson).