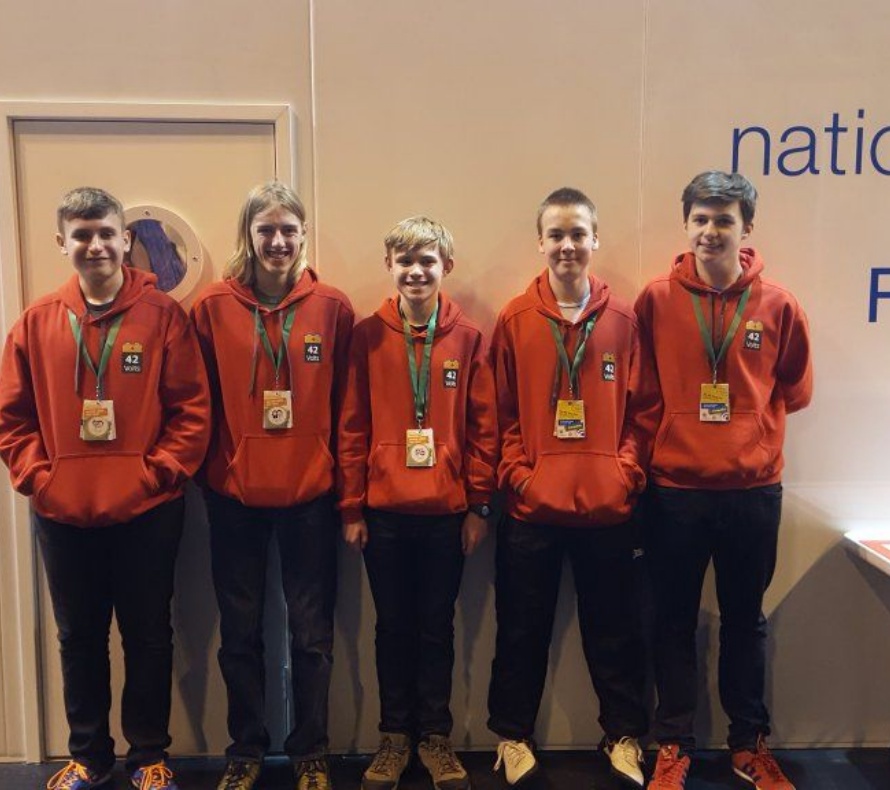 Here's an update for what happened at the VEX Robotics competition.

The first day (Thursday) was simply registering, inspection of our robot to see if it was legal as well as practising and testing everything was working. We also got to look round the technology fair that the competition was part of.

The final day (Saturday) was when most of the 'action' took place. The qualifiers were finished off and we ended in 13th place due to bad random partnership, but we were still happy. It then went on the team selection, where the top 8 teams in the qualifiers choose 2 other teams to be in their 'Alliance' who would then compete in the knock-outs. We were chosen by Henry VIII school and so we made it into the knock out stages, of which only 24 teams made it to. It then went straight into the matches, and we were up against a team chosen by 'Team R.O.U.S.E', the ones who had helped us qualify for the nationals in the first place who were very good and already have a place at the world championships! Each knock-out match was a best of three, and in the first game (Quarter Finals) we scraped a win by 1 point. After it was our other team mates turn to play in the match, and they won too, putting us through to the semi finals! The semi-finals was our ultimate goal so we are all very happy with this result for our first year of doing it! We were then knocked out by a very experienced team who had been taking part in VEX for 5 years who then went on to win the whole competition, so there was no shame in that defeat. After this, we came home, very pleased.

Overall we are very very happy with how far we made it, to the Semi Finals of the entire country! We are already looking forward to next year. Next year's challenge will be announced at the world championships in April, so we are getting ready to prepare for that and hope we do even better than we did this year!

A Year 11 team of Jack Middleton, Aaron Whetton, Ben Gudalajtys, Nathan Wallis and Joe Harpham reached the semifinals of the Vex Robotics UK Finals at the NEC on Saturday the 19th of March.  There were 40 teams from across the United Kingdom, coming from as far as Cork in Ireland and Motherwell in Scotland.  Each of the teams had qualified in their own regional competitions so were the best teams out of hundreds of schools.

The Vex competition requires teams to build and programme a robot that is fully autonomous, but for part of the competition can be driven by a human operator. In a 2 minute bout the robot has to pick up plastic balls in an arena and then hurl the balls into a net.

The UK Vex Robotic Challenge Final, organised over three days, is structured in such a way that each team plays 12 qualification rounds against randomly chosen opponents and then the leading teams select an ally to pair up for a three legged knock out phase. The LSST team, called Team 42Volts, finished 13rd out of 40 in the two day qualification phase. The top performing robot teams then choose an ally from other qualifiers and begin the knock out phase.

Thanks to good defensive strategy and excellent driving over two legs by Ben Gudalajtis the LSST robot and an ally from Coventry knocked out the 3rd seeds in the quarter finals.  Sadly the run came to an end in the semifinals when the team were stopped in their tracks by the aptly named Team Virus who went on to win the UK finals and will represent the UK in the Vex World Finals in Kentucky, Louisiana, USA next month.

All the best teams in the UK finals were sixth form teams with five years experience of VEX robot building and competition behind them so the LSST team did very well considering this was their first year of competing. The top teams also have proper facilities for testing and driving practice. Just before the event the LSST team also gained a great sponsor in Software Europe Ltd who have raised the profile of the team internationally using Twitter, blogs and their own website.

Details of the 2017 VEX Robot competition will be launched in five weeks time and LSST Team 42Volts will be planning their new challenge.